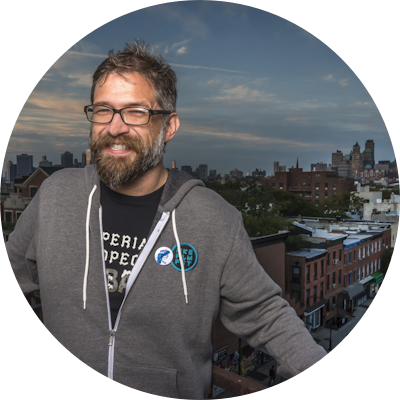 Leonard “Porkchop” Zimmerman’s creative path began at the Savannah College of Art and Design, and he’s been a frequently awarded and creatively coveted graphic designer for almost two decades. Adopting the nom-de-brush, “Porkchop,” Zimmerman’s work has been presented in group and solo exhibitions throughout the American South. He’s also been commissioned to create inventive mural projects for The Augusta Water Works, Children’s Hospital of Georgia, Public Library of Augusta-Richmond County and Unisys. In 2010, Zimmerman was voted Best Local Artist by Augusta Magazine, and Metro Spirit. In 2014 he made his public speaking debut with a TEDx talk about being happy. 2016 saw the release of the international award winning documentary "Happy: a small film with a big smile”, based on Zimmerman’s Happy Campaign. And in 2017 won the artist award from the Greater Augusta Arts Council for his contribution to the arts community. In July of 2021 Porkchop brought home the Best of Show Award at the first ever Augusta Poster Show. In 2022 Porkchop was selected as the recipient of the Georgia Art Education Association Distinguished Service Outside the Profession Award.

Have you noticed seeing a smile can often lighten your mood if you're having a bad day? Especially if it's a smiling Happy robot!…