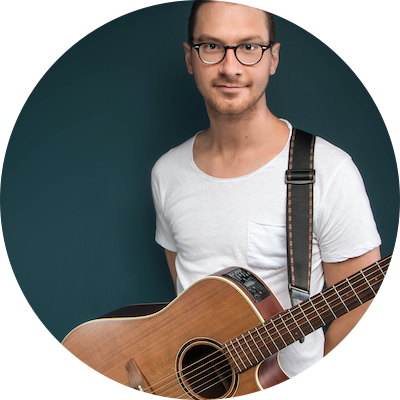 To watch Jacob Johnson play guitar is to watch someone do what he was born to do. Johnson glides up and down the fretboard with total confidence in a way that reminds one of Leo Kottke, barely looking at the instrument as he weaves delicate, dazzling melody lines with the occasional percussive thump on the strings. His sense of melody is a strong as his virtuosic playing, and his songwriting reveals a modestly bemused look at the world.

Johnson began playing when he was 10 years old, thanks primarily to his grandmother. “She played with pickup bands back in the ’40s,” he says. “When country acts would tour, they would just book a band in whatever city they were playing in. So she played with Ernest Tubb and Hank Snow and a lot of people like that. She taught me the first three or four chords I ever learned and said, ‘Jacob, if all you ever learn on the guitar is these three or four chords, you will always be able to pick up a guitar and play songs for people.’”

After that initial introduction, Johnson says he progressed quickly through his teen years. “There was a period of a couple of years where I went from zero to 60. I started out listening to Johnny Cash and then got into the old rockabilly like Carl Perkins and Gene Vincent, then it was the blues and Stevie Ray Vaughan, Clapton, and Hendrix. I guess by the time I was 18 or 19 I’d started getting into Phil Keaggy and Michael Hedges, who I consider the Jimi Hendrix of the acoustic guitar.
“He was one of the first players who got into two-handed tapping, alternate tuning, that kind of stuff. At a certain point I decided to focus on the acoustic guitar because there was just something about it. It seemed like this was the instrument that was going to give me my voice; that would allow me to develop my singing and songwriting in a way that my electric playing didn’t.”

Since dropping out of college in 2007, Jacob has traveled the country in (so far) six mini-vans, honing his craft, and making friends and fans along the way. Most of these were friendly now-forgotten faces that offered a warm meal and a couch to sleep on, but some were able to offer more. Such was the case with Grammy-nominated Australian guitar legend Tommy Emmanuel. Emmanuel put Jacob, as his opening act, on such notable stages as The Birchmere in Virginia, The State Theater in Maine, and The Newberry Opera House in South Carolina.

The songs and performances that developed in those touring years became the basis for Jacob’s most recent album, “One-Take Jake”. “One-Take Jake” features 11 of Jacob’s most requested songs recorded live in-studio with no-overdubs. The songs range from his own award-winning “The Ferryboat Waltz”, to his unique take on the Disney classic “Chim-Chim Cheree” by the Sherman Brothers. Few mistakes slip through the raw, understated production, but they underscore an important truth. While his talent may seem otherworldly, it’s not magic. It’s real, which is even better.

(By Vincent Harris adapted from The Greenville Journal)

Have you ever wondered what it's like for your favorite band when they are on the road touring? My guest Jacob Johnson talks abou…